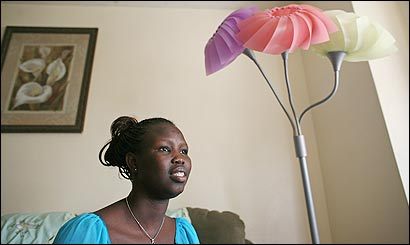 Abuk Bak, formerly of the AASG Speakers’ Bureau was featured this Monday in a two page article in the Boston Globe. The article focused on the widespread nature of slavery today and how there are abundant witnesses, even in Massachusetts.

“Now 33 years old and living in Lynn, Abuk has found happiness. She has been married for nine years, has three children, and works as an aide in a Lynnfield nursing home. Abuk shares her story for many reasons, among them catharsis and to create awareness. ‘Nobody is paying attention, like killings, kidnapping — they should really know — being put as slaves, and no one knows,’ she said.”