Hanging With Gloria Steinem
In Kenmore Square for the day, the famous feminist talks about slavery and making a pie with Stephen Colbert. 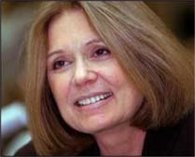 Whatever Gloria Steinem is to the rest of the world — feminist icon, gender warrior, or that sexy woman’s libber who went undercover as a Playboy bunny — in her own mind she is, and always has been, an organizer.

“People may identify me with [founding] Ms. Magazine or the Ms. Foundation, or I don’t know what, but most of my life has been spent being on the road, being an organizer,” she says, leaning forward in her chair in a room at the HotPublishel Commonwealth.

And that’s why the 72-year-old is in Boston this day: She’s organizing for a new cause, which is really an old cause for New England: abolishing slavery. Steinem has contributed a forward to “Enslaved: True Stories of Modern Day Slavery,” edited by Jesse Sage and Liora Kasten, directors of the Boston-based American Anti-Slavery Group. Now she is lending her not inconsiderable celebrity appeal to promoting this collection of first-hand slavery accounts.